All that hot weather shopping at the outdoor market yesterday led me to write about my summery, salty salad with an egg on top. But the dinner I was really shopping for gets an honorable mention: 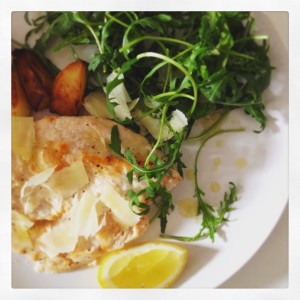 So simple, it’s something everybody already knows. But there you have it: pan fried chicken cutlets with lemon and olive oil; a salad and crispy potatoes. Who wouldn’t want that for dinner on a hot evening?

Walking home with my chicken from the market yesterday I wondered why it is that usually, (when in America) I feel awkward about asking a butcher to cut up or pound my chicken for me. Am I afraid to take up too much time, because there’s always a crowd at the counter in Brooklyn? Or maybe I feel that because I can, then I must. Yes, I know how to do it myself; I know how to cut a chicken into eight pieces, bone out thighs, make paillards, all of that.  But sometimes it feels like a chore (or at least the washing up of everything the chicken has come into contact with when what I really want to do is get on with cooking does). I know that most people in the U.S. are not buying their meat at a butcher’s shop, and I don’t always have that chance either. Here in Rome, however, there seems to be one one every block, and several within each market; and for better or worse, these butchers seem to have a bit more time on their hands…

At home in New York, the best nose-to-tail, locavore butchers certainly don’t sell chicken breasts. Of course, it makes perfect sense- why would they? Well, I thought they might have a few in the case once in a while, after having taken the other parts from the bird, but no. Oh, I know because I’ve had to ask, my head down, anticipating the thinly veiled scorn of the guys behind the counter when, one day, I urgently needed some chicken breasts for recipe development at the magazine.  Sorry! I know it’s not as tasty as the dark meat, nor does it lend itself to delicious, longer cooking methods, but sometimes a golden, quickly cooked piece of white meat is just the thing. Especially when the weather is hot and I have a child to spend time with before dinner.  It used to be that my two boys would entertain each other while I frantically dashed around, cooking for them while unpacking groceries and emptying lunchboxes.  Now my little guy is here alone with me so I like to keep my attention on him more than on the stove. Also, if I allow myself to ask the butcher to slice the chicken for me, not only will I get four or five thin scallopine for the same price as a chicken breast half (a petto as opposed to two petti, I realized with chagrin after ordering a single petti yesterday) it will also give me a dinner prep time of about ten minutes, and more time to talk with my son about how he made the bumpy mosaic tile he brought home from school.

So, I did. And because I had already washed that lively, peppery rughetta at lunchtime, I was even able to sit down with my bitter orange-infused gin and tonic before dinner.

Heat a large skillet over medium-high flame and add olive oil to coat the bottom. This is a good chance to crisp up any leftover boiled potatoes you have to serve alongside the chicken, which I did. When they were golden brown and crunchy I poured them out of the pan onto a plate, and added a bit more oil to the pan. Now the seasoned chicken cutlets went in one at a time, with just enough space between so they didn’t steam. (2-3 per pan). Tell me if I am insulting you by giving instructions for something this simple.  Once they are golden on the first side (2 minutes or so), flip each one and cook until barely springy when poked, about 1 minute more. Transfer to plates and repeat.

To me, the best way to eat this is just with a pile of fresh salad greens. Both are drizzled with lemon and olive oil (or a garlicky vinaigrette), and sprinkled with crunchy sea salt and fresh pepper. A few shavings of parmesan or pecorino Romano over everything is an optional flourish. Lemon on the side, certo.

6 thoughts on “The No Recipe Chicken Recipe”