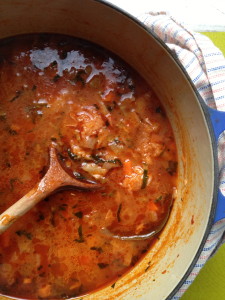 A Rich Base for Pasta e Fagioli

What is a simmer? A rapid one is agile and productive; a gentle one is steady, rhythmic. And there is also the bare simmer. Although on the surface a bare simmer hardly seems to be moving, there is work going on under the surface, a huge effort constantly deployed so it can quietly maintain itself.

It’s all been at a simmer for me. A bare one, that is- a hard-working, silent one- since November 2nd. Unspeakable tragedy has struck, and nothing will ever be the same. So what is the new normal? I don’t know yet. The kitchen stopped calling me. Comfort was brought to our door instead. The visitors poured in and helped out. Friends and family are getting us through, day to day. Meals arrive from them and they feed us, those dear ones- some of whom I’ve never met.

But something needed to bring me back- if only for a day. Was it the cold snap? I had an instinct to get out and be free for a moment- which for me meant a short walk alone; the first time in weeks that I didn’t need someone by my side. And then a short walk home, my canvas bag filled with vegetables, coffee beans, slab bacon. Snapped out of my gloom for a moment, I gathered up a few pieces of myself and found them in the kitchen.
I heated olive oil in a heavy pot and toasted fennel seed (should have bought that fresh fennel bulb!) until aromatic. I added diced carrots, celery, onion and garlic, and a bit of green cabbage and let them go until they were golden and sticky-soft, stirring often. Thinly sliced stems of lacinato kale- cavolo nero- went in too. I added a generous amount of tomato paste and two bay leaves and topped it all up with water.  Quick-soaked dried beans (navy and calypso) simmered all afternoon in a separate pot. I found a tiny rind of parmesan -the only one lucky enough to have escaped the uncharacteristic fridge-purging I had done in December (it had been a moment of stark recognition: cooking was not going to be part of my foreseeable future, not until an ounce of my old desire returned).  I guess this was the day; I scrubbed the rind and added it to the pot.  I stirred in the beans and their liquid and seasoned it all with salt and thyme.  Though I told myself I was heading to my desk several times, I found I could not leave the stove. After tending my soup nearly constantly, I chose a pasta- a short shape, chiocciole, so good for nestling those beans and vegetables in its curves.

What became of this whole pot, its humble contents simmered gently and mothered by me- one lonely child, needing attention? It became a comforting soup- no, thicker than a soup- as it was rich with savory oils from the parmesan rind, creamy from the marriage of bean and pasta starches- aromatic from vegetables and herbs. Can pasta e fagioli help me find a way to be here, with myself and for us all?  And yes, it’s true- there is one less at the table to share in this meal. Can I not still cook and keep his place, just as we keep him all around us?  I think I will try; in the quiet moments of gathering, peeling, chopping and stirring lie the remembering. 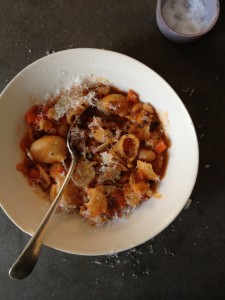