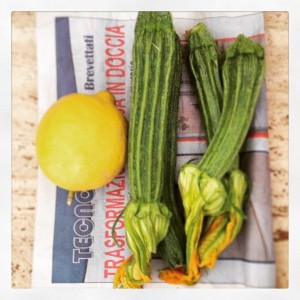 It was a sunny morning in Rome yesterday, and I woke up before the alarm went off. I opened the shutters onto the street, looked at the day, and I heard myself say to my six year old son: “Time to get uuUP! It’s a beautiful sunny day!” My voice was false, with a thin veneer of cheer,  but I think I tricked him. In reality I was a flat plane of arid land, nothing growing on it, nothing on the horizon. What was I looking forward to- what did I care about that day? This sunshine was better than the grey clouds of the day before, but I felt nothing.

After dropping my son at the school busstop on the edge of the Tiber river, I walked the round about way into Trastevere by going uphill on via Garibaldi and looping back down into the piazza san Cosimato. It’s a good little wake-up walk and helps me process my thoughts. Also, this is the most quiet route and I couldn’t bear the nuisance of having cars driving up behind me on narrow streets.  At the piazza I looked briefly at the market stalls without stepping close enough for anyone to speak to me.  I saw the gorgeous artichokes and thought about how much work would be involved in trimming them, and how I ought to feel inspired but instead I just felt dull, stupid and hopeless. I went into a pasticceria and drank a blood orange spremuta at the bar- it wasn’t as good as usual. I began walking home-  I passed my husband, G, outside the Settimiano arch as he was on his way to scout a location to show his architecture students and I noticed he was scowling a little, and had bags under his eyes. I wondered what I looked like to him, caught off-guard as I had been, out in the neighborhood with my morning face on, brewing my own inner storm. Ten minutes later I was in our apartment and in bed. It was not yet nine o’clock. I curled up into a ball and thought about how miserable I was, how exhausted.  I fell asleep.

I woke up and I thought: please don’t let it be really, really late. But when I looked at my phone it said 11:48.  I made tea and sat at my desk, and tried to look busy when G opened the door at 12, saying: do you want to go have lunch? I’m hungry! I didn’t tell him I hadn’t eaten breakfast yet. I said yes, and stalled him until the dizziness of excessive sleep had cleared.  I knew going out for lunch when I was still half asleep was better than staying home alone. I’m familiar enough with this state, and it scares me; I’m not sure I can trust myself to stay floating above its slimy, black depths. So even if I ‘m not ready for lunch right now, lunch is where I’ll go. Call it self-preservation, a survival instinct-  after all, it has been shown that I’ve got one.  Didn’t I outrun that car, make a split-second switch of direction, too close to call, too rapid to pull my boys with me?  What would have happened had I been quick-witted enough to yank Lucian’s hand, and he had run with me, stayed with me? His little brother would have followed him, as always, and they’d both be fine.  RUN!

But I didn’t. And now here we are, limping along, like a three-legged dog.

So I went out for lunch yesterday at a place I should have known better than to go to; my judgement was impaired.  After eating we couldn’t wait to escape, to get away from all the tourists who surrounded us.  But before I went home I had to pick up something for dinner, so I retraced my steps… The market vendors were packing up, but a few crates of produce remained. Young zucchini with their flowers attached looked fresh, and I was suddenly decisive. Then I asked for a lemon: un bel, said the lemon man, tossing a plump one onto his scale.  I bought loose eggs from a basket too. After that it was clear to me what to do: I turned around and walked to the cheese counter, where I bought fresh, creamy ricotta.

Just the thought of lemon zest, ricotta, eggs, and zucchini made me smile inside.  Something bright and cheery would be good.  A frittata for dinner … I know the one who’s gone wouldn’t have eaten it, but I think his brother will.  It won’t ask too much of me and it will feed us well.

This is what I think about while I watch slices of zucchini sizzle in the sauté pan:

What do I say to my little boy if he asks again at bedtime: can you please bring Lucian home so I can give him a hug? Will his eyes be closed?  Will he look like himself? I just want to give him a hug.

I toss the zucchini just a bit before adding their flowers and pouring in the eggs and ricotta. I use the cheese grater for lemon zest and parmesan and scatter them straight into the pan- it all smells so good. I don’t have a broiler to finish this so I have to flip the frittata, sliding it back into the skillet to cook the runny underside.

And how to serve this? Our fourth plate is chipped- it looks like a large bite was taken out by a recent fall on the counter. Is it dangerous? I think the tiny shards of china are gone. Maybe I’m being careless, but I can’t let a little thing like that deter me. We’re making do with what we’ve got here. It’s not perfect, and certainly not what we ever could have wanted- but it’s what we’ve got. 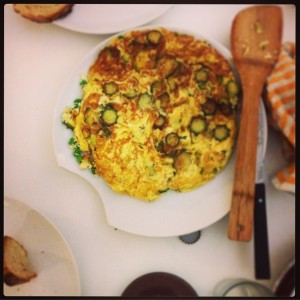