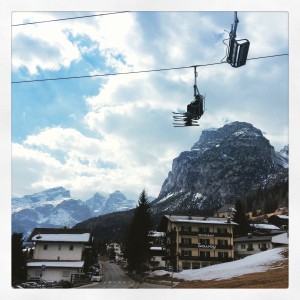 We are in the craggy Dolomites… Dolomiti to the Italians. We left watery Venice and its low-lying beauty for these heights. What a change: It’s hard for me to believe this is Italy. The locals speak Ladina, which sounds Germanic to my ear, and yet I detect Italian words within the conversations. White snow is clinging to rocky peaks, but the bare earth is peaking through- signs of spring.  Spring or not, Greg and Theo ski- and I watch children take ski lessons from our window at the foot of the bunny hill and take short walks; mostly I write in the comfort of our wooden chalet.

The food served here seems to be mostly pork, cheese, mushrooms.  The white wines are as fresh as mountain water, and reds are soft and delicate.  Supermarket shelves hold herbal tisanes, sauerkraut, polenta, barley and farro, alpine yogurt. Packages of nuts and seeds, for a healthy mountain diet, are a pleasant surprise- they are so scarce in Rome.

This is the home of speck. I love speck- it’s a lightly smoked cousin of prosciutto, and I like the fact that it’s usually quite dry. It’s wonderful when sliced very thin. Enormous slabs of it were in the case of a small village market so I asked for some, using my Italian to communicate (ha!) how I wanted it sliced (taglia fini?)- but feeling like I ought to know some German to bridge the gap. I was pleased with my own ability to communicate, but when the speck was handed to me, it was a bit too thick for a sandwich.  Oh well, I can still use it, of course- no problem. I bought some coffee too, and a bag of barley mixed with dried porcini for soup.

Then a wander up the main street of La Villa led me to the café attached to a bakery-panificio, bakerei was painted on the wall.  Inside, behind lace curtains, the bar and a few tables and banquettes were shiny and spotless …the decor, which had probably seemed fabulous in 1981, seemed charmingly retro to me. The Carpenters played out of the speakers; the glass case was filled with slices of apple strudel, cream-topped cakes and poppy seed-filled pastries.  A kind older woman in a very plain apron asked in her quiet voice if she could help me.  I hoped for soup, asking if she had anything “non dolce”. She said yes, panini: speck, salami, prosciutto cotto; or formaggio. Inside I groaned, wishing for something lighter, a vegetable.  But I asked for speck and sat outside on a plastic chair, overlooking the town. I expected a hot, pressed panino, very plain. This is what she brought to me, saying buon appetito twice. When I saw my sandwich I wanted to hug her. 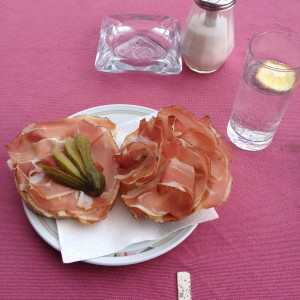 It was perfectly sliced, arranged with care into a pretty rosette- and served open on an chewy caraway and anise-seeded brown roll. An extra touch of pride was evident in the single cornichon, fanned with a flourish.  A little love, food made with care, a universal language. 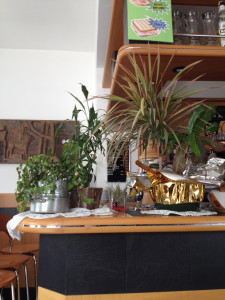 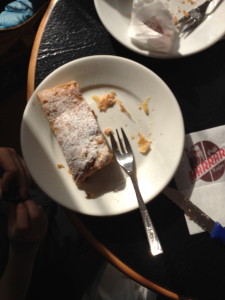 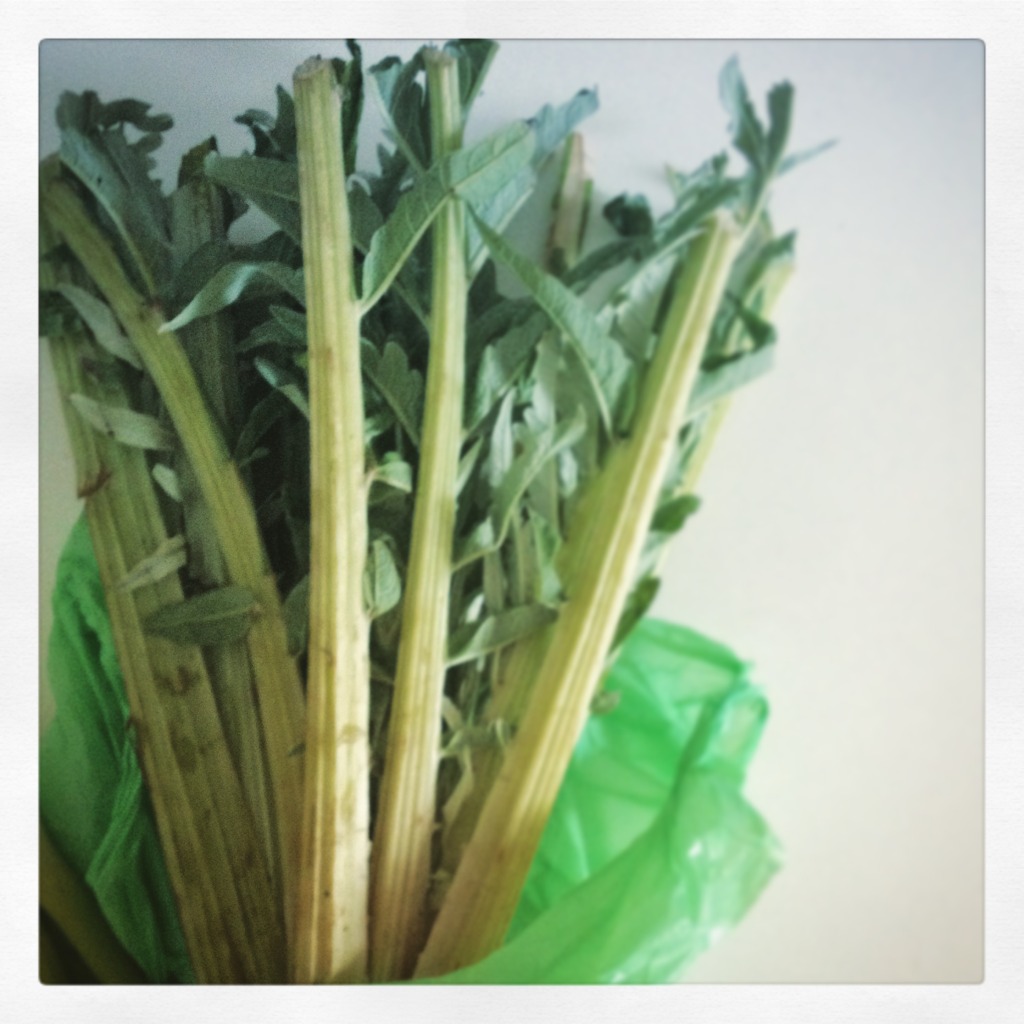